I awoke this morning to a greening world, softly watered by rivulets of rain, its steady patter punctuated by the clear call of a chickadee.  The familiar sound of the Metra pulling into Lake Forest told me it was 6:24 am.  Spring is here, and “all is well with the world”—if only that were so!  The COVID pandemic has ripped a virtual scar across the face of our country, marring our intrinsic wellbeing.  We go out into the world wearing masks now, which make it harder for all of us to really “see” each other.  While our courageous health-care workers and other First Responders fight on the barricades of this battle, other less-altruistic souls maneuver behind the lines, seeking to aggrandize this crisis through the same tired politics of partisanship, division and blame.  As our televisions blare for our attention, the call of the little chickadee becomes harder and harder to hear.

This is not the first crisis we humans have had to face.  Other vernal seasons have brought plague, famine and war to the world—notably the Bubonic Plague of 1348-1350, which became endemic in Europe over the next five centuries.  It was during one outbreak in London during 1623-25 that John Donne, Dean of St. Paul’s, fell ill and nearly died of it.  He survived his personal ordeal, during which he wrote these memorable lines from his Devotions upon Emergent Occasions, as he listened to the tolling of a church bell for someone who had recently died in the City: 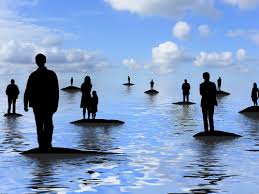 The church is catholic, universal, so are all her actions; all that she does belongs to all.  When she baptizes a child, that action concerns me…when she buries a man, that action concerns me.  …No man is an island, entire of itself; every man is a piece of the continent, a part of the main…  Any man’s death diminishes me because I am involved in mankind, and therefore never send to know for whom the bells tolls; it tolls for thee.

I rejoice in all the ways that you, the people of our First Pres. community, have lived out the truth of Donne’s words through your love, care and prayers for each other.  And I thank God for giving you the will and capacity to serve others by putting your love in action.

As in any crisis, there are those who would bravely serve others, and others who would serve only themselves.  Our Lord has made it clear which ones we are called to become:

Those who would save their life will lose it, and those who lose their life for my sake, and for the sake of the gospel, will save it (Mk. 8:35).

As we awake each morning to the ongoing sounds of a spring so strange yet so familiar, let us put our trust in God’s steadfast love—for us and for all.  As Donne eloquently reminds us, we are indeed “involved” with humankind. Our care for our neighbor will become the best way of truly caring for ourselves.