The Priesthood of Jesus 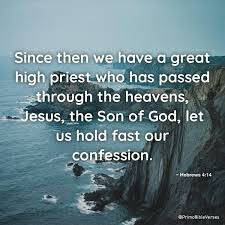 When Christians speak of the identity and role of Jesus, titles like “Shepherd,” “Messiah,” “Savior” and “King” come to mind.  Less familiar is the title of “Priest”—much less “a great high priest,” as he is named in Hebrews 4:12-16, our scripture lesson for this coming Sunday.

When we hear the word “priest,” a number of thoughts come to mind.  In light of the massive sexual abuse scandals involving Roman Catholic priests in America and in other nations like France, not all of these thoughts will be positive.  But what exactly is a priest?

In the Judeo-Christian tradition, we first hear about priests in the Book of Genesis, where Melchizedek, the King of Salem, offered Abram bread and wine after battle.  We are told that he was a “priest of God Most High” (Gen. 14:20) who blesses Abram.

During the Exodus, Moses’ brother Aaron and his sons were made priests who served God in the Sanctuary of the Tabernacle.  Later on, the tribe of Levi would serve the sanctuaries in the land of Canaan, eventually serving in the Temple in Jerusalem.  They were known as Levites, and were led by a High Priest whose role was to serve as the intermediary between God and the people, teaching God’s Law and blessing them, accepting their tithes and offerings, and once a year, making a sacrifice of atonement for the sins of the whole nation in the innermost chamber of the Temple, the “Holy of Holies” where the Presence of God resided.  Today, the tradition continues on Yom Kippur, the Day of Atonement for Jews.

According to the Book of Hebrews, the Four Qualifications for being a priest were:

Ever since Old Testament times, the priesthood has suffered abuses of power, corruption and sin.  Jesus Christ changed all that once and for all when he made atonement for all our sins on the cross.  It is true that Jesus was tempted as we are and experienced the full scope of human trial and suffering.  He was one of us—and one with us.  Yet unlike any of us, he alone lived a sinless life of full obedience to God.  This is the message of the Book of Hebrews.  Jesus is our “great high priest who has passed through the heavens” (Heb. 4:14) and on Good Friday (our Day of Atonement) he became both Priest and Sacrifice saying, “Father, forgive them” even as he fulfilled the prophecy of John the Baptist who said on the day that Jesus was baptized, “Behold the Lamb of God who takes away the sin of the world” (John 1:29).  Today, the Church claims Jesus to be  “a priest forever according to the order of Melchizedek” (Psalm 110:4).

This is the solid truth that allows each and all of us to “approach the throne of grace with boldness” (Heb. 4:16).  Jesus, our High Priest, intercedes for us and calls us to be a priesthood of believers ourselves, as Martin Luther understood the Body of Christ to be.  We are called to be servants of God’s grace, bearing one another’s burdens and standing in the gap, leading others to the One who has the true power to forgive and heal us all.  Christians may be far less than holy, but it is holy work that we do: the work of mercy, forgiveness and reconciliation which advances the Kingdom of Heaven on earth.