“From the Cross, to the Grave, to the Skies”

As Holy Week approaches, its message reaches across a world gripped by darkness with fingers of dawning, celestial light:  “This is my body, given for you…Love one another…I will not leave you orphaned…Father, forgive them, for they don’t know what they’re doing.”

It would be reasonable to conclude–in light of all the evidence of the widening horror in Ukraine; the ongoing suffering in Africa and the Middle East; the entrenched political divisions at home and the increasing saber-rattling abroad—it would be reasonable to conclude that darkness is stronger than light.  “The lamps are going out all over Europe,” British Foreign Secretary Sir Edward Grey famously remarked on the eve of the First World War.  Over a century later: a century darkened with appalling horrors of genocide, starvation and war—it is difficult to argue otherwise.  One way or another, we have seen lights go out all over the world.

So is the message of Holy Week then only a fool’s hope?  Do Jesus’ words, “The last will be first…Blessed are the merciful…The meek shall inherit the earth”—is this only wishful thinking?  Or do these promises carry a weight of glory within them that prevails beyond night?

Back in the beginning, the text of Genesis states, “And there was evening, and morning, the first day.”  Upon earth, darkness is there before dawn–just as Good Friday was there before Easter.  It is not so in heaven.  When heavenly light comes in silence, like the sliver of morning, like a slowly-opening hand…just one finger of it has power to transfigure the stony landscapes of our despair with colors of courage, conviction and hope. 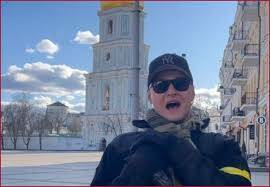 Consider the BoomBox musician Andriy Khlyvnyuk.  He chose to return to Ukraine from his American tour to defend his people.  Once there, he sang a song of freedom from 1914 called “The Red Viburnum in the Meadow” at dawn in Kyiv’s Sofiskaya Square.  The power of that message inspired Pink Floyd to break nearly thirty years of silence to sing alongside Andriy.

This is how light conquers darkness.  For love alone must lead us out of darkness and into the dawn.  Christ is Risen.  Or as Pink Floyd sings it,  “Hey, Hey, Rise Up.”